Last week was the IRONMAN 70.3 CHATTANOOGA triathlon in Chattanooga, TN.  Where were you!?

There’s a couple of things that happened in between.

I headed out from KC the Thursday before… for my 12 hour drive that started after throwing the kids on the bus for school.  Being a thrifty racer, I opted to drive with all my gear and stay at a budget friendly BNB 1.5 miles north of the river.  I brought all my own food and with the exception of dinner with some friends the night before the race, I avoided costly trips eating out.

BUT, along the way, I spotted the below and our good friend Chris that doesn’t seem to get the idea of taking care of your bike.  I mean, really?  Your bike’s outside on a rack when you have a camper trailer?  Bad form.  He got some razzing on Facebook for that. 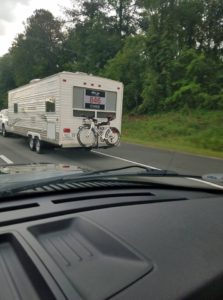 I also hung around IRONMAN Village for some announcements and the Pro Panel.
One awesome announcement was that IRONMAN and Chattanooga extended their contract for 5 more years for the half and full.  The race isn’t going anywhere for a while, and for good reason.  Great venue!

The pro panel consisted of Andrew Starykowicz, Andy Potts, Adam Otstot, Heather Jackson, Meredith Kessler and Linsey Corbin. Listen in as they weren’t all that excited about the points system being modified and having to chase new targets to qualify for Kona.

I dropped by Quintana Roo bikes for a factory tour and sit down with new IRONMAN world record holder Matt Hanson.  QR are great bikes (despite some issues I had with components that they replaced for me when I dropped in) and Matt seemed like a cool customer.

On to the race…
THE SWIM // 25:08 // 1:18 per 100 m
Hello swimming…. can we say wetsuit and down river swim!?
I wish I was that fast in real life, but nothing helps the freestyle more than rubber and a current.  I know I enjoyed the self seeded start, rolling start and only 25 minutes to get 1.2 miles.  I’m pretty sure this swim time will stand for the rest of my life as a PR.

It wasn’t like I remembered the full in 2014.  The first 15 miles were uneventful and then it started wearing on me.  No, not the hills.  The chip seal roads and cracks every 4 feet.  I was so worn out by being rattled for 56 miles.  My back did NOT like that.  For the full, I’ll probably look at a lesser inflation on the tires to soften the ride.

There was some drafting, sadly.  Couple of pace lines 5 to 6 riders deep passed at times and looked to have no intentions of spacing out or passing.  Just zooming by having a great team ride.  But, when you have 2500 athletes, some aren’t going to play by the rules.

I also implemented my less is more in nutrition and more is more in hydration.  My goal was to get just under a gallon of water in on the bike, half a bottle of sports drink and only took 1.5 GU gels.  This was after breakfast 2 hours before the swim and clif blocks 45 min before and hot shot 20 minutes before the swim.  Also had a hot shot to start the bike.  The plan was hydration, energy to make it through the run without needing solids and avoid sloshing and GI issues on the run.  I knew the hills were coming on the run and heat was starting to be a factor by the end of the bike.

The big climbs conveniently were in full sun locations, keeping everyone honest and exposing those that had not prepared to make that run.

I caught most of the bikers I was hop scotching with on the bike without a problem and made some serious headway.  I was on pace for a sub 5, but with 4 miles to go, heat kicking up and more hills to come, I was relegated to holding whatever pace I could find and get to the finish.

THE END // 5:03:54
Not a PR technically with the 5:01 in Boulder, but the bike was 2 miles short in Boulder, but Choo is a down river swim.  each in their own way helped me out, but the hills on the run for Choo were a lot tougher than the run around the Rez in Boulder.  Equally difficult in their own right, so I’ll keep the 5:01 PR knowing I gave what I had for Choo (A effort) that with any past fitness, I would have taken longer.  Had I raced Boulder with this fitness level, I think I would have easily been sub 5.

Thoughts about racing a half

Well, that’s a lot and about wraps it up.  Any questions?  Shoot me a note, comment on the blog, find me at www.SetThePaceTriathlon.com – REACH OUT!

You may need to defer a race regardless of the current state of affairs. Know your options!
#Endurancesports
#deferment

IRONMAN VR18 // Doing all 3 divisions in a weekend https://youtu.be/v-OjNCG4M0o via @YouTube