Unless you were living under a rock, you heard that IRONMAN Florida was detoured to Haines City after Hurricane Michael ripped through the panhandle, sideswiping Panama City Beach rendering the area unable to support an IRONMAN event..

In comes in IMFL RD, Ben Rousa, and IRONMAN + Haines City to relocate the race 400 miles away and still have it.  No small accomplishment for 3 weeks notice, and after verifying refunds for lodging in PCB, changing flights, booking new lodging, rental cars, etc etc the race was on for me!

Hurricane Michael and the logistics changes distracted me from my pity party after IM Chattanooga.  My back KILLED me on the bike.  My stomach DID NOT like me on the run.  It was kind of a $hit show from mile 20 on the bike on.  Worse timing performance than 2014 on basically the same course WITH NO SWIM in 2018.  I seriously had doubts about racing at IMFL.  Once Michael hit, I was instantly more grateful for the chance to even have a race that I snapped out of it. BUT, would my back be an issue?  Would my gut suck it up?  Read on to find out!

They also offered deferral into IRONMAN Texas next April, but we were able to make the logistics work, so myself and the crew headed down.

That’s a VERY abbreviated version of the angst and anxiety surrounding the whole hurricane and aftermath… anyone that went through it can attest to the days and weeks of that process.

I was also a part of the IM Certified Coaching crew that was at the Become One tent handing out wrist bands and we got up on stage for a First Timer panel on Friday.  If we chatted, say hi!  It was so much fun talking to all the first timers and every time I asked “are you ready?”, every person was like “oh yeah!”.  Not one person showed any doubt or fear.  Either good poker faces or they were all ready! 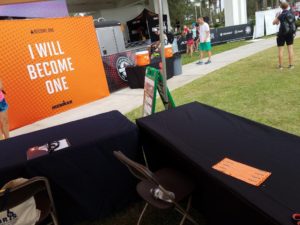 It was wetsuit legal and the course was a two loop on a “pants” pattern.

Overall I was happy with my time and expended energy.  There was more beatings in that swim than any race I have ever done.  The turns were crazy with everyone coming in tight, and then pools of utter chaos as the pack tried to spread out again.  People swimming over, under, across, stopping… holy crap I should have taken self defense courses along with training to be ready for that swim.

For the amount of sighting, turns, avoiding and all other swimming gymnastics I had to do, I’ll take that swim time as a win.

While not approaching the speed I had hoped for, it was a small victory on the sense I was not in crazy back pain for the entire ride.

At IRONMAN Chattanooga I was in so much agony from mile 20 to 116.  My lower lumbar started to hurt, nerve pain would shoot down my leg and I would lose any ability to apply power and it was MISERABLE!  It severely affected my mood for the run and kind of put a shadow on the race experience.  It also affected me so munch I was questioning racing IMFL.

Rewind a few weeks and I had a great bike fit guy come to my house and tweak my setup.  Down side was it was so cold in Kansas City I didn’t get time to ride outside much at all.  Mostly trainer rides and for getting used to aero for long periods, it’s not great.  LOVE indoor training for speed and power work, not for getting used to aero for long periods.  Short story, I was going into the bike at IMFL with NO CLUE how it was going to play out.

Mile 20… D@MN IT the back pain is BACK!  Started the old routine of standing up, stretching it out, and suffering.  I was staring down the barrel of 92 miles of pure suck fest.

But something interesting happened around mile 40.  I was trying and adjusting position and remembered what my bike guru said about trying to get elbows on pads and relaxing the hands.  I went to the extreme.  All weight on the pads, but was BARELY on the seat.  Basically the pads and my feet were all weight bearing… and you know what, it worked!  The pain subsided and every now again I could twist at the core to stretch out, not stand upright and fully stretch, and manage.  I had some power back.  I wasn’t going to crush the course, but I wasn’t hating life.  I could tell after a while that the rest of my body needed more time to get used to the position, but that’s minor compared to the relief I was getting.  No way could I have found that position on my old setup.  We have another appointment to get it fully dialed in.  For once I’m optimistic the bike won’t be a suffer fest. 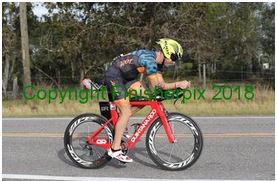 The wheels came off on the second loop.  Stomach issues were back in FULL FORCE.

It wasn’t the legs.  I was hydrated and peeing on the run.  I had PLENTY of nutrition on the bike.  My gut was just not having it.  I finally pulled over at an aid station and made the decision to force a purge.  I was over this.  It didn’t help.  I actually cramped while heaving.  $hit show x 2.

Then it happened.  I tried my HOT SHOT anti-cramp.  I knew it was a gamble and I just barely sipped it.  Bad idea.  Made it to the Base Salt aid station and UNLEASHED in a port-a-potty.  No forcing needed here.

So there I was… loop 3… 2x puker… walking it home.  I tried to jog when I could.  If my stomach protested, I walked.  The reality was I felt a lot better after the second hurl and my pace improved.  The problem was I wanted REAL FOOD.  Not clif bars, gu’s, chews, pretzels, chips or broth.  I wanted a PB&J sandwich.  Juicy burger with cheese.  All those aid stations and some were grilling their real food and I could smell it.  I wanted so bad to pilfer a burger from them.  I should have asked… 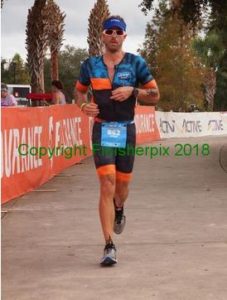 While 96th may not be all that impressive, it’s my best AG finish to date after 6 full IRONMAN events.  What!?  2nd worst time after IM LAKE TAHOE in 2013, but BEST AG PLACEMENT EVER!  Wth.

What that tells me is that the course was not kind to a lot of people.  I would not call it tough per say, but the mental focus that went into the change of venue was depleting for the entire trip.  Not only was I having to focus on the race and logistics of a full IM, but I had to make sure the family was set up with an awkward stay at Anna Maria to get their beach trip and me handling race stuff in Haines City.  I had to commute Friday and Saturday back and forth and it was non-stop full speed.  No real time to relax and enjoy it.  I’m not complaining, but rather offering that as a warning to other racers that non-race and training stress is real and can add up.  Move a race 400 miles away and it adds up for anyone. 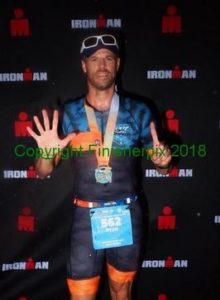 Having a proper bike fit is key.  I have had back issues aside from cycling and this brings it front and center.  It makes me upset at the last fit I had in 2017 and how much was just missed or left out.  Finding a good fitter is just as important as the gadgets they use.

I’m going real food.  I’m ditching all the race stuff that companies say you need and is engineered to fuel you to the finish line.  Yeah, they may provide the basics you need, but if you can’t stomach another gel or chew, what’s the point.  PB&J sandwiches for one.  I’ll be looking at other options as well and testing them out.

HOT SHOT… this product has changed the cramp game for me for sure.  Problem was it’s a factor in my GI issues on the run.  Future races I plan on one at swim start and one at bike start.  I’m going with Gatorade Gatorlyte in the bike sports drink to load up for the run and take packets with me to throw in drinks on the run.  I can’t do the spice of the HOT SHOT on the run.  It’s derailed a couple of races for me this year and I was trying to make it work since they fix my exercise induced cramping issue.

HEY!  If you read this far, check out a couple cool things.